A string of worst evers

As the COVID19 deaths peak, in the first wave at least, across much of the developed world the narrative this week has moved to exit strategies. The medical situation remains highly uncertain, as the article in the Atlantic illustrated. A core unknown, due to the lack of extensive antibody testing, is the percentage of populations which have been infected and the degree of antibodies in those infected. What initially seemed to me to be a reasonable exit framework announced by the US has been fraught with execution uncertainty over the quantity and quality of the testing required, exasperated by the divisive ramblings of the man-child king (of the Orangeness variety).

The economic news has been dismal with a string of worst ever’s – including in retail sales, confidence indices, unemployment, energy and manufacturing. The number of turned over L shaped graphs is mind-blowing. And that’s only in the US! The exhibit below stuck me as telling, particularly for an economy fuelled by consumer demand. 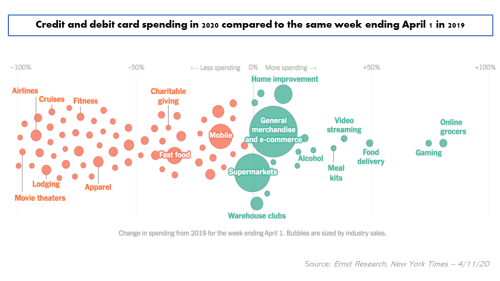 In the words of the great Charlie Munger: “This thing is different. Everybody talks as if they know what’s going to happen, and nobody knows what’s going to happen.” The equally wise Martin Wolf of the FT, who penned an article this week called “The world economy is now collapsing” posted a video of his thoughts here. His article was based upon the release of the latest IMF economic forecasts, as below. 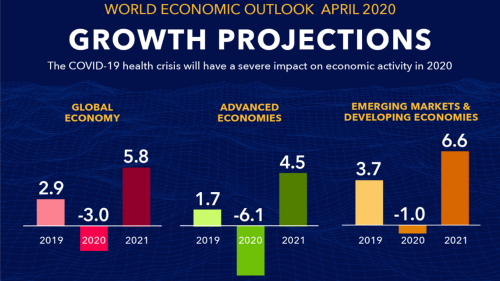 The resulting impacts on real GDP and debt levels for the advanced and emerging/developing countries respectively are shown below. 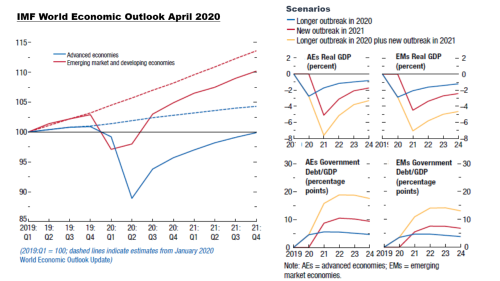 A few other interesting projections released this week include this one from Morgan Stanley. 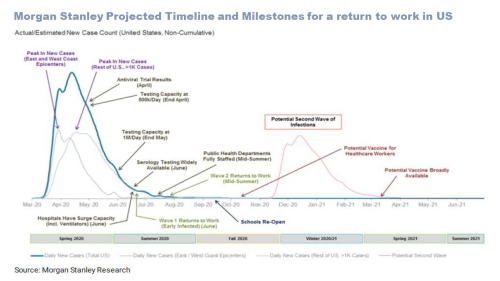 And this one from UBS.

And this one from JP Morgan. 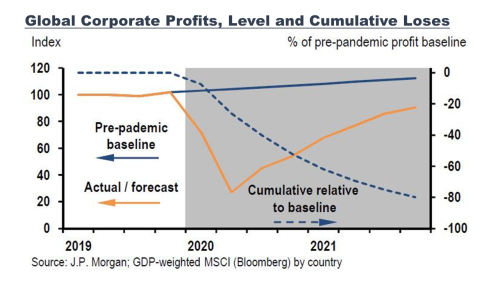 In terms of S&P500 EPS numbers, this week will provide some more clarity with nearly 100 firms reporting. Goldman’ estimates for 2020 compared to my previous guestimates (2020 operating EPS of $103 versus $130 and $115 in base and pessimistic) were interesting this week given the negative figure for Q2 before returning to over $50 for Q4. The “don’t fight the fed” and TINA merchants amongst the current bulls have yet to confront the reality of this recession for 2021 earnings where the fantasy of an EPS above $170 for 2021 will become ever apparent with time in my opinion. Even an optimistic forward multiple of 14 on a 2021 operating EPS of $150 implies a 25% fall in the S&P500. And I think that’s la la land given the numbers that are now emerging! We’ll see what this week brings…..

One response to “A string of worst evers”