With the S&P500 off its September high and US 10 year yields well over 3% back in October, its crazy to think that just 6 months later the 10-year yield is currently around 2.6% and the S&P500 has just hit new highs. What was all the fuss about! A return to a steady US GDP non-inflationary growth as per the Q1 figures and with Q1 earnings coming in ahead of reduced expectations (with approx. half of the S&P500 reported), one could be tempted to think we have returned to the good old Goldilocks days. My predictions (here) of a rebound off the December lows followed by more volatility in Q1 were well wide of the mark with volatility across major asset classes eerily low as the market hits new highs. My record of been wide of the mark has at least been consistent with this post from January last year calling a premature ending to Goldilocks!

Some commentators are bullish on more upside for the market on the improved economic and earnings figures and cite comparisons to similar 20% drops and recoveries in 1998 and 2011. The graph below shows the comparisons, with 2 other 20% drops (although 1957 and 1990 were during recessions). 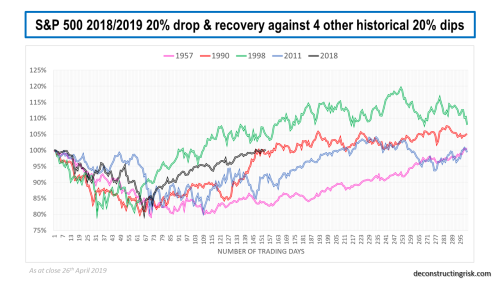 As to what happens next, I have no idea. Some say at 17 times forward earnings; the market is not too expensive, and a wall of money will fuel this FOMO (fear of missing out) rally. Although the positive narrative from Q1 earnings will likely dictate short term trends, the market just feels like it has gotten ahead of itself to me and I feel comfortable taking some money off the table. As the graph below of monthly moves greater than +/- 3% shows, volatility is never that far away.

A return to economic and earnings growth also raises the question of how long the Fed can remain ultra-accommodative. The arguments on raising rates and debts levels are all very déjà vu! For the moment however, unless the China trade talks fall apart, all looks surprisingly rosy.

There are always concerns. Bank of America recently highlighted that over the past five years, US firms have paid out $3.3 trillion in dividends and bought back $2.7 trillion of their own shares ($800 billion in 2018 alone) whilst taking on $2.5 trillion of new debt. The buybacks are responsible for 30% of earnings growth according to Bank of America (20% in 2018). The need to pay down this debt was a focus for many firms in the stock market rout. Bank of America predict further upside in equities to the summer before a pullback in Q3. The ever-excellent John Authers (ex-FT columnist now with Bloomberg) had an insightful article on corporate debt in March.

According to a recent report from Euler Hermes, the non-bank leveraged loan market is flattering the overall US corporate debt profile and corporate spreads are likely under estimating risk. This report from Moodys suggests that high leverage is offset by ample coverage of net interest expense. In this report, S&P estimate that “the proportion of companies having aggressive or highly leveraged financial risk has risen slightly to 61% (compared to 2009)”. Regulators also remain concerned about debt levels, particularly leveraged loans as per this recent report. The size of the leveraged loan market globally is estimated around $1.5 trillion, with the Bank of England estimates shown below. 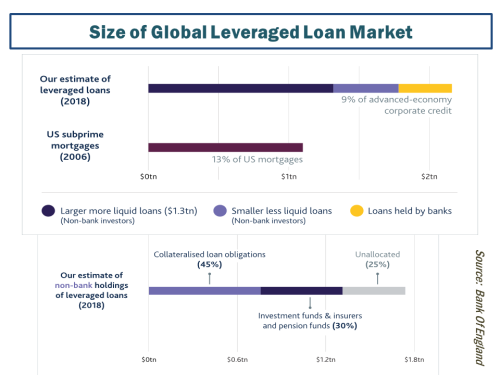 According to Ron Temple of Lazard Asset Management the “deterioration in underwriting standards for leveraged loans is increasingly worrisome” and the graph below shows the increased leverage in the market which combined with lax terms (approx. 80% are covenant lite loans) are a red flag in the event of any downturn.

The buoyant private equity market is a testament to the joys of leverage, with recent PE raisings hitting records and an estimated $1.3 trillion of undeployed capital as of March. In this recent FT article, Jonathan Lavine of Bain Capital warned that private equity groups are taking on too much debt in the competition to win deals (the Bain 2019 market report is well worth a read).

Still, these are all things to worry about in times of stress. As of now, let’s enjoy Goldilocks return and keep dancing. Carefully mind you, it is late and we don’t want to wake those bears.