For many years Warren Buffet has been highlighting the benefits of investing in a low cost index fund over paying return sapping fees to professional “helpers”. In Buffet’s 2016 letter, released over the weekend, he estimates approx $100 billion in fees have been wasted by investors in the past decade in “the search by the elite for superior investment advice”.

The selected returns by hedge funds, specifically fund of funds, since 2008 in the letter make Buffet’s point strongly (those funds were selected by Ted Seides in the wager with Buffet). Although I have no love for the overpaid superheros of the hedge fund world, Buffet’s wager has the tail wind of a particularly bad run of returns from the hedgies of late. The graph below shows the average 10 year returns from the S&P500 (including dividends less 15 basis points for fees) against hedge fund returns, net of fees, from the BarclayHedge website (I only selected those categories with more than 99 funds included). 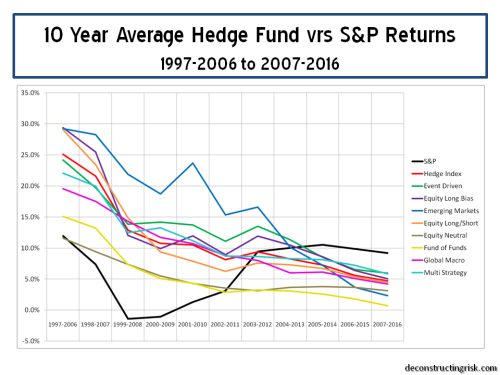 Clearly, the 10 year averages for the past 5 years haven’t been kind to the masters of the universe. That may be reflective of a permanent change in markets, due to anything from more regulation to the era of low risk premia to less leverage to size. Buffet puts it down to success attracting too much capital and managers subsequent addiction to fees. I do like the explanation given by Bill Ruane from Buffet’s letter in the following quote – “In investment management, the progression is from the innovators to the imitators to the swarming incompetents.”

One response to “Hedge Blues”