Likely proving that a little knowledge is a dangerous thing, I was looking over the insurance tangible book value (TBV) multiples that I monitor and it stuck me that the S shaped curve from prospect theory may be more suitable than a linear fit. As I say, I am likely adding one and one and getting three!

The TBV multiples have continued to expand in 2013 as the graph below shows (market values as of the date shown against the tangible book value from the preceding quarter).

For the market values as of today against Q3 2013 tangible book value, I fitted a S curve as below.

I am aware that the S curve is the wrong way around compared to one in the previous post but that could be rectified by flipping the axis. As I said, I haven’t really thought it through in detail but thought it was interesting all the same!

With that, I’d like to wish everybody a great Christmas and a peaceful 2014. Many thanks for your interest in my ramblings through 2013.

One must look at one’s own behaviour….

That markets often behave irrationally, particularly over the short to medium term, is generally widely accepted today. Many examples can be cited to show that human behaviour does not restrict itself to the neo-classical view of rational player’s expected utility maximisation. The subject of the behavioural impact of humans in economics and finance is a vast and developing one which has and is the subject of many academic papers.

As a result of a recent side project, I have had cause to dig a little bit deeper into some of the principles behind behavioural economics and finance. In particular my attention has been caught by prospect theory, so named from the 1979 paper “Prospect theory decision making under risk” by Amos Tversky and Daniel Kahneman (who received a Nobel Prize in 2002 for his work on the subject), largely seen as the pioneers of behavioural economics and finance. In essence, prospect theory asserts that humans derive utility differently for losses and gains relative to a reference point.

My limited knowledge on the topic has been tweaked by a paper from Nicholas Barberis in 2012 entitled “Thirty Years of Prospect Theory in Economics: A Review and Assessment”. Although Barberis states that “while prospect theory contains many remarkable insights, it is not ready made for economic applications”, he highlights some recent research that may “eventually find a permanent and significant place in mainstream economic analysis.”

Tversky and Kahneman updated the 1979 original prospect theory in 1992 to overcome initial limitations, so called cumulative prospect theory, based upon four elements:

1)    Reference Dependence – people derive utility from gains and losses relative to a reference point (rather than from absolute levels).

2)    Loss Aversion – people are much more sensitive to losses rather than gains of the same magnitude. 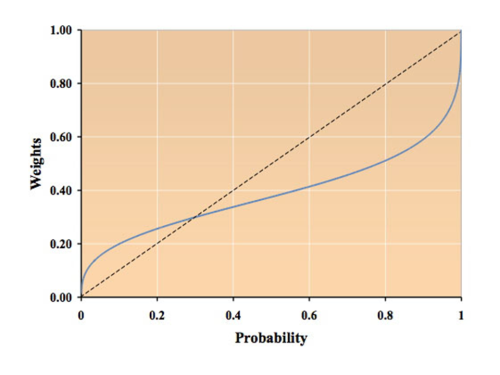 Barberis highlights a number of sectors where prospect theory, as a model of decision making under risk, has applications. I will only comment on areas of interest to me, namely finance and insurance.

Probability weighting highlights that investors overweight the tail of distributions and numerous studies confirm that positively skewed stocks have lower average returns than would otherwise be suggested by expected utility investors. In other words, investors overestimate the probability of finding the next Google. This explains the lower average return of classes such as distressed stocks, OTC stocks, and out of the money options.

Loss aversion has also been used to explain the equity premium compared to bonds (i.e. returns have to be higher to compensate investors for volatility). Using an assumption called “narrow framing” investors evaluate separate risks according to their characteristics. This has also been used to explain why many people don’t invest in the stock market.

Prospect theory is also used to explain one long standing failure of investor behaviour, namely selling winners too early and holding on to losers too long. This is something that I have learned from experience to my determent and one piece of advice that many professional investors emphasis again and again. This characteristic was highlighted in research as far back as 1985 in a paper by Shefin and Statman. Further research to formalise this “disposition effect” is on-going and much debated. Other research focuses on the impact of “realisation” utility when it comes time to sell a stock (e.g. we derive more utility in selling a winner).

In the insurance area, prospect theory has been used to explain consumers purchasing behaviour. For example, if we overweight tail events then we likely
purchase too much insurance, at too low a deductible! Purchasing of a product such as an annuity is also impacted by our mentality of being risk adverse on gains/risk seeker on losses. The consumer is therefore more sensitive to a potential “loss” on an annuity by dying earlier than expected as opposed to a “gain” by living longer. One area that has proven difficult in using prospect theory is to understand what reference point people use in making decisions such as the purchase of an annuity.

There have been recent criticisms on the use of behaviour theories in finance and economics. Daniel Kahneman himself, whilst promoting the paperback launch of his 2011 bestselling book “Thinking, Fast and Slow” expressed his frustration at the blasé labelling of a divergence of social science as behavioural economics – “When it comes to policy making, applications of social or cognitive psychology are now routinely labeled behavioral economics”.

Another recent report entitled “How Behavioural Economics Trims Its Sails and Why” by Ryan Bubb and Richard Pildes claims that some policymakers naive embrace of the new field may actually be doing more harm than good. The report states that “fuller, simpler, and more effective disclosure, one of the main options in behavioural economic’s arsenal, is not a realistic way, in many contexts, to rectify adequately the problems in individual capacity to make accurate, informed judgments with the appropriate time horizons.” The report cites examples such as opt-out options in automatic enrolment of retirement savings and disclosure on teaser rates in credit products that claimed to offer reasoned choices to consumers but ultimately led to unintended economic impacts.

It is ironic (and probably inevitable) that some features designed to modify behaviour backfire given that, in the words of behavioural economist Dan Ariely, the premise of the theory is that “we are fallible, easily confused, not that smart, and often irrational.”

Following on from the last post on high beta delights, I had a look at a S&P high beta ETF (SPHB) against the S&P500 as well as a S&P low volatility ETF (SPLV) to test the assertion that the latest run in the market is a new phase whereby investors who missed out on early gains are taking on more risk in the form of high beta stocks to catch up. The two ETFs above have only been around since mid-2011 so I selected the start of 2012 until last Friday as the timeframe.

Following up on a previous post, Level 3 Communications (LVLT) has had a good run since June, breaking out of its trading range and holding around $30. Over the past 2 years, a successful trading strategy on LVLT would have been buying around $20 and selling in the high twenties, so I would expect traders of LVLT to take some profits (also there may be more shares on the market towards the end of the month after LVLT recently called some convertible debt). Given the historical volatility in LVLT and the market high valuations, a pull-back seems inevitable in the short term although over the medium term I have an increasing conviction that the future for LVLT’s long suffering equity holders is bright.

The recent increase has been driven by improving operating metrics, as per the graph on revenues and EBITDA margin below, and improved valuation multiples in the sector, as can be seen from a graphic on telecomrambings, plus the general increase in market valuations.

LVLT has also been working hard on getting its oversized debt load (as at Q3 net debt was approx $8 billion) down to a more manageable size. To date in Q4, the firm managed to refinance approx $1 billion of debt and convert another $200 million. As LVLT achieves sustainable FCF in 2014, a virtuous circle of increased operating margins and reduced debt servicing may follow, vastly improving the credit profile of this once basket case (credit risk wise). The debt tinkering should reduce the average interest rate by 30 bps to 6.9% for year end and, assuming 2014 EBITDA of $1.8 billion, will reduce the net debt to EBITDA multiple from the current 5.2 to a more manageable 4.4.

The analysts have all increased their targets on the back of the recent results under the new leadership of Jeff Storey. UBS AG, Canaccord and DA Davidson are at $30, Goldman Sachs has $34, Cowen has $39, Deutsche Bank is at $40 (although this includes $8 of NOLs).

It’s important to again stress that LVLT has a very volatile history and is not for the weak hearted. YahooFinance calculates the current beta for LVLT at 1.8. The graph below illustrates historical weekly volatility versus the S&P500. There is also an analysis of the relationship between the S&P500 and LVLT since 2009 – LVLT moved with the market 66% of the time (3.2 times on average the market move on the way up and 2.7 times on the way down!), 22% of the time when the S&P was up LVLT was down (by a factor of 3!), and 12% of the time when the S&P was down LVLT was up (by a factor of 6.5!).

In an update of the highly influential paper by Andrea Frazzini and Lasse Pedersen called “Betting against Beta”, the authors test a number of investing strategies around beta and state that ”we find empirically that portfolios of high-beta assets have lower alphas and Sharpe ratios than portfolios of low-beta assets”. Although I would caution about short term volatility and an overexcited US equity market currently, I am hopeful that the days of LVLT being a pin-up for the high beta side are numbered.

A fascinating graph from Louise Yamada on 22o years of US interest rates. The infamous technical analyst uses the 30 year rate since 1977 and prime corporate rates for the prior period.