Wall Street has been getting the Hollywood treatment of late with a particular deep vein of subject matter emanating from the financial crisis. Margin Call and The Big Short are amongst my favourites. Although many are exaggerated for dramatic effect, the benefit of these movies is as a reference when particular topics arise in general conversation. If anybody ever mentions the prospect of investing in OTC or pink sheet penny stocks (these are generally smaller highly speculative stocks traded on inter-dealer markets), now all you have to do is reference The Wolf of Wall Street. In the movie, Jordan Belfort has a colourful description of such stocks (by reference to the world’s oldest profession) whilst Mark Hanna captures the Wild West character of the market in the statement that “it’s all a fugazi”.

With the failure of the prohibition on recreational marijuana or cannabis becoming increasingly apparent across the developed world, changes in policies, particularly in the US, has been an ideal subject for the needed hype in the OTC/pink sheet market to attract suckers. Recreational marijuana is now legal in four US States and medical marijuana laws have been approved in 24 US States. California has a ballot on the Adult Use of Marijuana Act scheduled for November. With an estimated 14 million stoners in the US alone, the potential is massive albeit that the legality of prohibition remains highly political. A multitude of dodgy firms with tenuous links to the drug were duly over-hyped and over-bought in the so-called pot bubble up to and through 2014 and 2015. Fugazi was one apt description.

Away from the hype, there are a few respectable firms (trading on proper exchanges) involved in developing products in the medical marijuana sector. Three of these firms include GW Pharmaceuticals (GWPH), Insys Therapeutics (INSY) and Cara Therapeutics (CARA). All are highly speculative biotech plays at varying stages of the development and commercialisation of certain cannabinoid-based medicines. For example, GWPH and CARA trade at multiples of over 50 times revenue and are burning cash. GWPH has £150 million left of the £350 million raised from shareholders, spending approximately £45 million over the past 6 months. Last month, the FDA granted GWPH’s drug Epidiolex orphan status for treating tuberous sclerosis complex, a rare genetic disorder that causes epilepsy in about 80% to 90% of the patients affected. INSY has had problems with its existing cancer pain spray, Subsys, due to concerns over opioids and is awaiting an FDA decision, due in July, on its reformulation of the marijuana-based medicine, Marinol, to be sold under the brand name Syndros. CARA, who develop chemical substances to treat various degrees of pain by selectively targeting kappa opioid receptors, has also been hit by a FDA trial suspension. The graph below shows the wild ride that the share price of each firm has been on since January 2014. 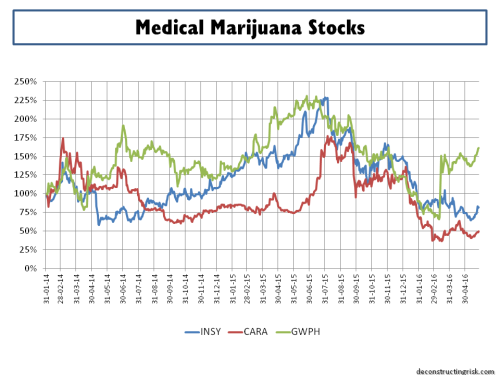 Although these types of firms are highly interesting, they are way outside my risk appetite. I just don’t know enough about the science to understand whether the hype around each is justified. Aside from the usual recreational activity in college many moons ago, my interest in this topic has been on the more boring end of the scale, around the commercial development of a cousin of the infamous cannabis variety but without the psychoactive component tetrehydrocannabinol (THC), commonly referred to as industrial hemp. Industrial hemp historically is known for the strength of its fiber, commonly used for rope making, but its development has suffered from its association with its higher THC cousin over the past 50 years.

Interest in the unique qualities of industrial hemp have been revived in recent years but the harvesting and processing technologies for the plant remain firmly in the 19th century. Some years ago, I was involved with a project that tried to modernise the approach to harvesting and processing industrial hemp, more akin with the long fibre techniques developed for flax, which unfortunately ended in failure due to a lack of resources and, well, the naivety of youth. Extracting long fibers from hemp (a process called decortication) without damaging their strength through mechanical or chemical processes offers a high value use for the plant, as opposed to lower value uses in construction or animal bedding. Others across Europe continue to try and develop such new processes and a recent report from the European Industrial Hemp Association (EIHA) show that the uses for this plant are developing slowly. Newer uses include biocomposites (for the automotive sector), insulation material and other non-woven applications (such as technical textiles). It was interesting to see the recent increase in prices for short hemp and flax fibers, as per the graph below from the Nova Institut. 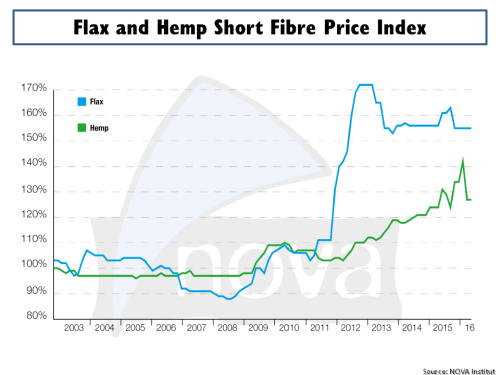 Developing industrial hemp is far from the current hype surrounding its more infamous THC rich cousin. Nonetheless, developing an unjustifiably ignored natural resource with significant potential for uses across industry or developing new pain relief medicines for seriously ill patients are far more interesting to me than allowing people get legally high every now and again.