The post-crisis CDS market has undergone significant regulatory change including a substantial regulatory overhaul due to the Volcker Rule, requirements from reporting to central clearing under the Dodd–Frank Act and the European Markets Infrastructure Regulation (EMIR), and Basel III capital and liquidity regulations. Measuring the size of the market consistently is notorious difficult given different accounting treatments, netting protocols, collateral requirements, and legal enforceability standards. Many organisations have been publishing data on the market (my source is the BIS for this post) but consistency has been an issue. Although a deeply flawed metric (due to some of the reasons just highlighted and then some), the graph below on the nominal size of the CDS market (which updates this post) illustrates the point on recent trends.

The gross market value (defined by BIS as the sum of the absolute values of all open contracts with either positive or negative replacement values) and the net market value (which includes counterparty netting) are better metrics and indicate the real CDS exposure is a small fraction of the nominal market size, as per the graph below. 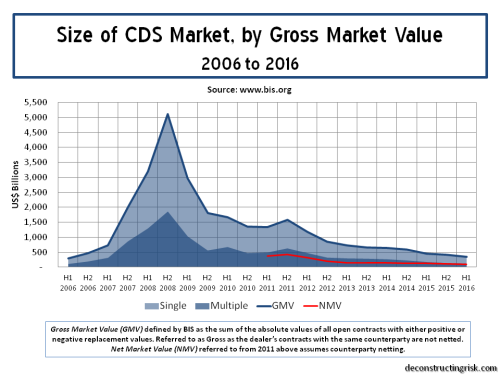 Critics of the regulatory impact on the liquidity of the CDS market argue that these instruments are a vital tool in the credit markets for hedging positions, allowing investors to efficiently express investment positions and facilitating price discovery. A major issue for liquidity in the market is the capital constraints imposed by regulators which impedes the ability of financial institutions to engage in market-making. The withdrawal of Deutsche Bank from the CDS market was seen as a major blow despite some asset managers and hedge funds stepping up to the mark.

The impact of rising interest rates in the coming years on the credit markets will likely have some interesting, and potentially unforeseen, consequences. With a plethora of Goldman Sachs alumni currently working on Trump’s “very major hair cut on Dodd-Frank”, amongst other regulations, it will be interesting to see if any amendments lead to a shot in the arm for the CDS market. Jamie Dimon, in his most recent shareholder letter, calls for an approach by Trumps’ lieutenants “to open up the rulebook in the light of day and rework the rules and regulations that don’t work well or are unnecessary”.