The M&A permutations being talked about in the US telecom sector are fascinating. The AT&T/Time Warner deal has commentators frothing at the mouth about possible tie-ups, particularly given the laissez faire attitude to regulation of the new FCC Chairman, Ajit Pai. Names such as DISH, Comcast, Disney, Netflix, SiriusXM, Charter are regularly tied to the big telcos and/or each other in the speculation.

Existing wireless revenues from AT&T and Verizon have plateaued and are now starting to decrease due to cut throat competition on unlimited plans from T-Mobile and Sprint, as the graph below shows. 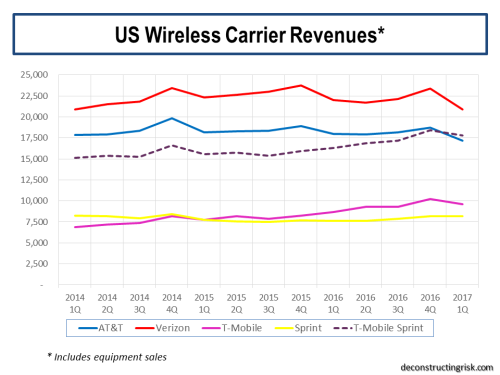 The T-Mobile/Sprint merger is now been talked about again, after the year long FCC spectrum moratorium on competitors talking has passed. The current bidding frenzy between AT&T and Verizon over Straight Path’s millimetre wave frequencies that can be used to carry large amounts of data over short distances has brought the hype over 5G services to a new high. Verizon’s purchase of XO last year enabled them to lease XO’s 102 LMDS licenses in the 28 GHz and 39 GHz bands so it is somewhat surprising to see them be so aggressive in bidding for Straight Path.

The analyst Craig Moffett believes that the winning bidder for Straight Path will have significant leverage with the FCC in determining how these wave frequencies are repackaged for use by competitors. Although wireless margins are not under significant pressure, as the graph below shows, it is obvious that there is now a full scale war for control of the wavelengths that will be critical to 5G services in the search for new revenues. T-Mobile and DISH are also holders of high frequency wavelengths been touted as suitable for 5G. 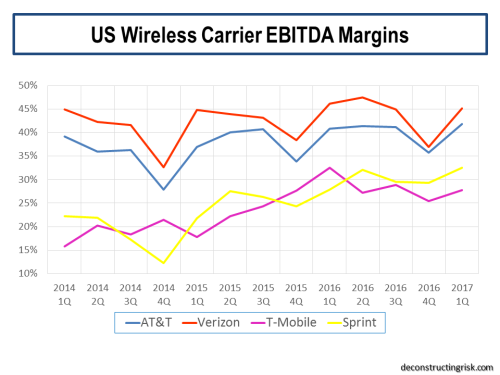 The fascinating thing about the frenzy over Straight Path is that the hype over high frequencies such as the 39 GHz band is not new. The reason such spectrum has gone largely unused in the past is that it has been historically difficult to create reliable, secure, mobile connections in those bands. Variable weather conditions, often something as common as a rainy day, can impact coverage in high frequencies. I wonder what’s changed?