There is a lot of interesting stuff in the latest IMF Financial Stability Report. After much research on global debts levels (as per this post in 2014 and this one in 2015) over the past few years, the graph below on G20 gross debt levels from the IMF shows how little progress has been made. 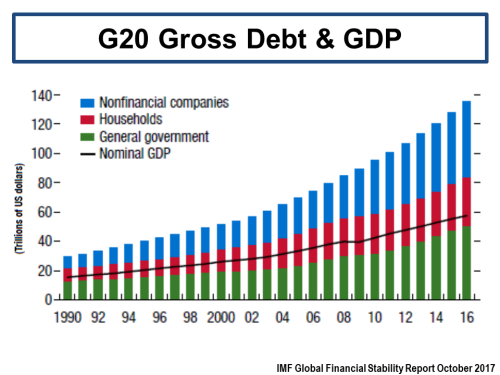 When looked at by advanced economy, the trend in gross debt from 2006 to 2016 looks startling, particularly for government debt.

As the IMF state, “one lesson from the global financial crisis is that excessive debt that creates debt servicing problems can lead to financial strains” and “another lesson is that gross liabilities matter”.

The question does arise as to the economic impact of these debt levels if interest rates start to rise across advanced economies?

As if we all needed proof that the people across the so called developed world are troubled about the future, the election of Donald Trump to the US presidency last Tuesday is still a shock and unfolded in a spookingly familiar manner to the Brexit vote. “Wrong!” as Alec Baldwin has so aptly mimicked could be the call to the pollsters and commentators who are now scratching around despondently for reasons.

Why, we again ask, could an electorate so recklessly vote against conventional wisdom. I think the answer is in the question. Although the factors behind Trump’s vote are multi-faceted and reflect a bizarre coalition that will be impossible to satisfy, the over-riding factor has to lie at the door of an electorate that is troubled by future prospects and rejects the status quo. Why else would they vote for a man that polls suggests a majority acknowledge as been unqualified for the job? Aspects such as the worry of aging baby boomers at the diminishing returns on savings, the insecurity of the middle and working classes over globalisation, and the realisation that the technology from the shared economy is a cover for unsecure low wage employment have all contributed. Like in the Brexit vote, Trump tapped into a nostalgia for times past as an easy answer to the complex questions facing the world we live in.

The age profile of the Brexiteers in the UK and Trump voters in the US is interesting in that it highlights that Trump’s surprise victory is slightly less of a factor of age than Brexit.

Aging demographics in the developed world has been highlighted by many as a contributor to the current low growth. I last posted on this topic before here and the graph below is a reminder of one of the current predictions by the UN. 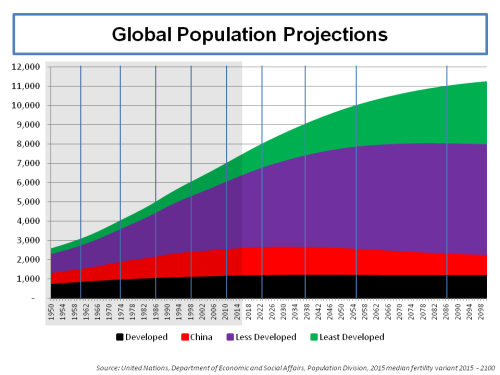 The impacts of aging on future dependency ratios can be seen below, again from UN predictions.

A fascinating report from the research department of the FED last month, entitled “Understanding the New Normal: The Role of Demographics”, argues that demographic factors alone in the US account for 1.25% decline in the nature rate of interest and real GDP growth since 1980. The report concludes that “looking forward, the model suggests that low interest rates, low output growth, and low investment rates are here to stay, suggesting that the U.S. economy has entered a new normal”.

There was an interesting article recently in the FT called “The effects of aging” which included the graph below from UBS which strikingly highlights the changes in demographic trends and financial crises.

Whatever disparate concoction of economic policies that Trump will follow in an attempt to tap the ghost of Reaganomics, it is clear that lower taxes and increased US debt will be feature. Trump may surprise everyone and use debt wisely to increase productivity on items such as rebuilding infrastructure, although it’s more likely to go on wasteful expenditure to satisfy his motley crew of constituents (eh hello, a Mexico wall!).

I constructed an index to show the relative level of debt dependency of countries using the 2020 debt level predicted by the IMF and the average 2020 to 2050 dependency ratios by the UN. Both the US and the UK are above the average based upon current forecasts and really can’t afford any debt laden policy cul-de-sacs. One only has to look at Japan for enlightenment in that direction. We have to hope that policies pursued by politicians in the US and the UK in their attempt to bring back the past over the next few years don’t result in unsustainable debt levels. Maybe inflation, some are calling the outcome of Trump’s likely policies trumpflation, will inflate debts away!

In his recent book, “A banquet of consequences”, Satyajit Das articulated the choice we have in terms of a choice of two bad options by using the metaphor of the ancient  mythical sea monsters, Scylla and Charybdis, who terrorised sailors. Das said “Today, the world is trapped between Scylla, existing policies that promise stagnation and slow decline, and Charybdis, decisive action that leads to an immediate loss in living standards.”

The character of Charybdis is said to be the personification of a whirlwind. Remind you of anyone….?