The news from Tower Group International Ltd (TWGP) today has been disastrous. A $365 million reserve hit from commercial lines business and a $215 goodwill impairment charge resulted in a Fitch downgrade to below investment grade. The impact can be seen below in the recent share price collapse.

Difficulties at the firm were first signalled in the postponement of its quarterly results in early August and despite some hurriedly arranged new reinsurance coverages; the future for the firm looks bleak. It yet again highlights that once confidence in an insurer’s reserves is lost, it is difficult to recover (unless like AIG you get purchased by the US government!). It also shows that intangible assets provide little comfort in distress scenarios. There are cases, such as XL Capital, where a recovery of sorts has occurred but such firms rarely recover their past glories and often end up been sold at a discount or going into run-off. It is always important to remember that insurance is a risk business where you sell a product whose cost of goods sold is not known with certainty for sometime after the point of sale.

AM Best publishes statistics on US insurance impairments, where an impairment is defined as an insurer who has been the subject of a regulatory action taken by an insurance supervisory department and can be used as a good proxy for a default. As can be seen by the pie graph below, the largest cause of impairment, by quite a distance, is inadequate pricing and reserving. 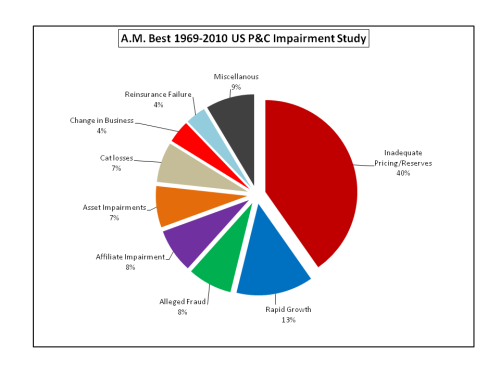 What the exhibit above likely misses is the changing profile of the US insurance sector over the past 20 years with less small to medium sized firms and improving risk management practices. The number of impairments has being decreasing in recent years as a result of changes in the sector’s profile.

Let’s hope that TWGP is an exception rather than the start of a new trend.

4 responses to “How P&C insurers die”