The market is currently full of overdue anguish, with the air coming out of some of the frothier areas of the market notably in the biotech and internet sectors. To get an idea of the movements, I had a quick look at the S&P500 against a number of other indices such as the Powershares S&P high beta, S&P low volatility, & Nasdaq Internet ETFs plus the Nasdaq Biotech Index (SPHB, SPLV, PNQI & NBI respectively) as per the graph below. 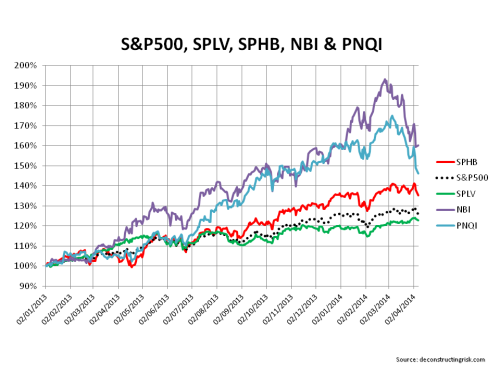 One of the more amusing bubbles in the recent run-up has been that surrounding the creeping legalization of cannabis in the US. Penny stocks in the sector, as if straight out of “The Wolf of Wall Street”, have been rocketing. Some of the more dubious firms have jumped on the bandwagon by coming up with fanciful plans on exploiting cannabis markets after having tried their luck as software, oil exploration or even tanning companies! Firms such as CannaVest (CANV) and Vape Holdings (VAPE) have shown classic pump & dump penny stock rises and falls in recent months.

One stock that has rode both the biotech and the cannabis buddle is a UK firm called GW Pharmaceuticals (GWP.L) founded in 1998 to develop cannabinoid prescription medicines to meet patient needs under medical supervision. Their main product, Sativex, a treatment for moderate to severe spasticity is approved or near approval in a number of countries such as Norway, Israel, and Austria. Bulls point to approval in the US of Sativex and the potential for other cannabinoid products in areas such as cancer and diabetes to justify the current valuation of multiples of revenue for this loss making firm. GWP has risen from 50p last year to a high (forgive the pun!) of 400p in March with a fall back to 250p recently. Cannabis stocks offer the ultimate high for aging stoners, add in some biotech hype for GWP and the sky is the limit to a happy ever after fantasy……….will people ever learn!

To me, the deflating of sector bubbles is a very healthy sign of a rational market.  Whether an outbreak of rationality will last is another matter.