McKinsey Global Institute has an interesting report out entitled “Global flows in a digital age: How trade, finance, people, and data connect the world economy”. The report goes into different aspects of flows across the globe with a central assertion as follows:

“Two major forces are now accelerating the growth and evolution of global flows. The first is increasing global prosperity. By 2025, 1.8 billion people around the world will enter the consuming class, nearly all from emerging markets, and emerging-market consumers will spend $30 trillion annually, up from $12 trillion today. This will create enormous new hubs for consumer demand and global production. The second major force is the growing pervasiveness of Internet connectivity and the spread of digital technologies. More than two-thirds of us have mobile phones. In 2012, there were 2.7 billion people connected to the Internet. A torrent of data now travels around the world. Cross-border Internet traffic grew 18-fold between 2005 and 2012.“

One graph in the report that caught my attention was the one below of the growth in foreign revenues from top US firms across different sectors. This is interesting and feeds directly into some of the contentions asserted by Jeremy Siegel in justifying a high CAPE ratio (as discussed in this post). 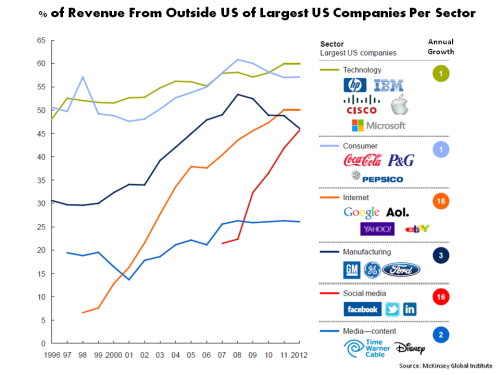 What is interesting about the graph above is the fall in the manufacturing firms since the financial crisis and the relatively slow growth of revenues outside of the US from the “established” technology and consumer firms in the US. Given the growth in global flows, it suggests they need to be more focused on the opportunities outside the US, particularly if the graph below on future consumption in 2025 turns out to accurate. 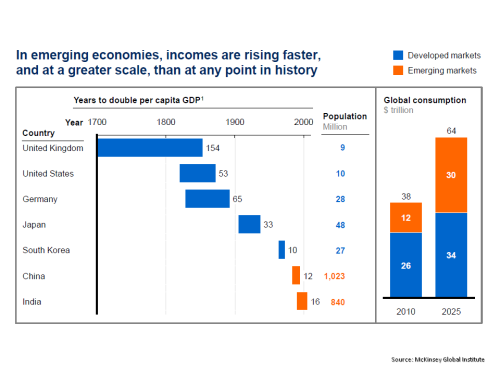 I was particularly taken with the pieces of the report in relation to the impact of the internet and e-commerce. The following extract highlighted the impact:

“The power of digitization comes especially from its marginal cost economics that reduce costs associated with access, discovery, and distribution of goods and services to nearly zero. As a result, the cost of participating in flows is lowered for individuals, small firms, and entrepreneurs. This is already leading not only to innovations in business models but also to the emergence of micromultinationals, microwork, and microsupply chains that are able to tap into global opportunities. This significantly removes barriers to participating in global flows, broadening opportunities. It also will put pressure on all companies to innovate their business models to capture the opportunities and respond to new sources of competition, and to counter the pressure on their existing business models from digitization’s marginal-cost economics.” 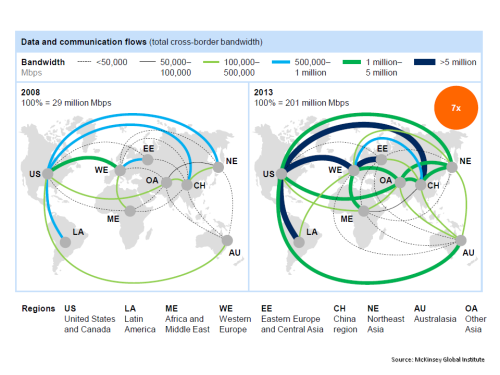 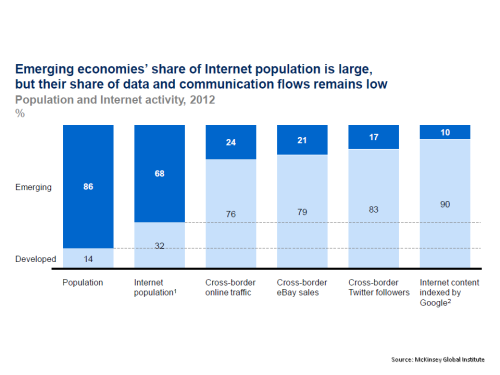 It does however also show how things may grow as emerging economies take advantage of the power of the wired world. As the report states: “the pace of change is likely to accelerate even more dramatically as more of the world goes online”.

There is some other interesting stuff in the MGI report and its worth a quick read.