Lancashire…so much to answer for.

My bearishness on the reinsurance and specialty insurance sector is based upon my view of a lack of operating income upside due to the growing pricing pressures and poor investment income. I have posted many times (most recently here) on the book value multiple expansion that has driven valuations over the past few years. With operating income under pressure, further multiple expansion represents the only upside in valuations from here and that’s not a very attractive risk/reward profile in my view. So I am happy to go to the sidelines to observe from here.

So, what does this mean for my previously disclosed weak spot for Lancashire, one the richest valued names in the sector? Lancashire posted YE2013 results last week and disappointed the market on the size of its special dividend. As previously highlighted, its Cathedral acquisition marked a change in direction for Lancashire, one which has confused observers as to its future. During the conference call, in response to anxious analysts, management assured the market that M&A is behind it and that its remains a nimble lead specialist high risk/high return underwriter dedicated to maximising shareholder returns from a fixed capital base, despite the lower than expected final special dividend announced for 2013.

The graph below illustrates the past success of Lancashire. Writing large lead lines on property, energy, marine and aviation business has resulted in some astonishingly good underwriting returns for Lancashire in the past. The slowly increasing calendar year combined ratios for the past 5 years and the lack of meaningful reserve releases for the past two year (2013 even saw some reserve deterioration on old years) show the competitive pressures that have been building on Lancashire’s business model. 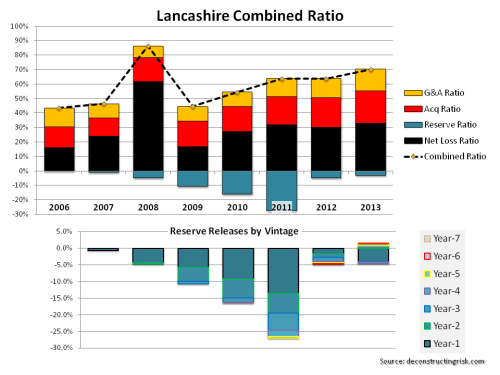 The Cathedral acquisition offers Lancashire access to another block of specialist business (which does look stickier than some of Lancashire’s business, particularly on the property side). It also offers Lancashire access to Lloyds which could have some capital arbitrage advantages if Lancashire starts to write the energy and terrorism business through the Lloyds’ platform (as indicated by CEO Richard Brindle on the call). Including the impact of drastically reducing the property retrocession book for 2014, I estimate that the Cathedral deal will add approx 25% to GWP and NEP for 2014. Based upon indications during the call, I estimate that GWP breakdown for 2014 as per the graph below.

One attractive feature of Lancashire is that it has gone from a net seller of retrocession to a net buyer. Management highlighted the purchase of an additional $100 million in aggregate protection. This is reflected in the January 1 PML figures. Although both Lancashire and Cathedral write over 40% of their business in Q1, I have taken the January 1 PML figures as a percentage of the average earned premium figures from the prior and current year in the exhibit below. 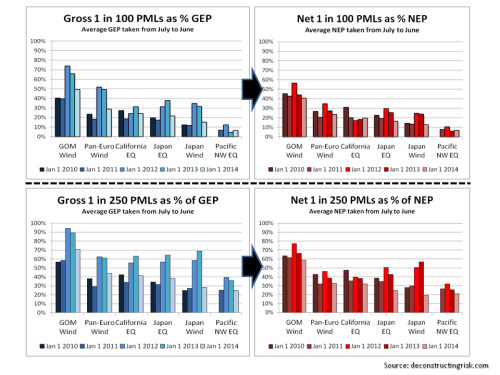 The graphs above clearly show that Lancashire is derisking its portfolio compared to the higher risk profile of the past two years (notably in relation to Japan). This is a clever way to play the current market. Notwithstanding this de-risking, the portfolio remains a high risk one with significant natural catastrophic exposure.

It is hard to factor in the Cathedral results without more historical data than the quarterly 2013 figures provided in the recent supplement (another presentation does provide historical ultimate loss ratio figures, which have steadily decreased over time for the acquired portfolio) and lsome of the CFO comments on the call referring to attritional loss ratios & 2013 reserve releases. I estimate a 68% combined ratio in 2014, absent significant catastrophe losses, which means an increase in the 2013 underwriting profit of $170 million to $220 million. With other income, such as investment income and fee income from the sidecar, 2014 could offer a return of the higher special dividend.

So, do I make an exception for Lancashire? First, even though the share price hasn’t performed well and currently trades around Stg7.30, the stock remains highly valued around 180% tangible book.  Second, pricing pressures mean that Lancashire will find it hard to make combined ratios for the combined entities significantly lower than the 70% achieved in 2013, in my view. So overall, although Lancashire is tempting (and will be more so if it falls further towards Stg7.00), my stance remains that the upside over the medium term does not compensate for the potential downside. Sometimes it is hard to remain disciplined……

12 responses to “Lancashire…so much to answer for.”