It is no surprise that the populist revolt against globalisation in many developed countries is causing concern amongst the so called elite. The philosophy of the Economist magazine is based upon its founder’s opposition to the protectionist Corn Laws in 1843. It is therefore predictable that they would mount a strong argument for the benefits of free trade in their latest addition, citing multiple research sources. The Economist concludes that “a three pronged agenda of demand management, active labour-market policies and boosting competition would go a long way to tackling the problems that are unfairly laid at the door of globalisation”.

One of the studies referenced in the Economist articles which catch my eye is that by Jason Furman of the Council of Economic Advisors in the US. The graph below from Furman’s report shows the growth in return on invested capital (excluding goodwill)  of US publically quoted firms and the stunning divergence of those in the top 75th and 90th percentiles. 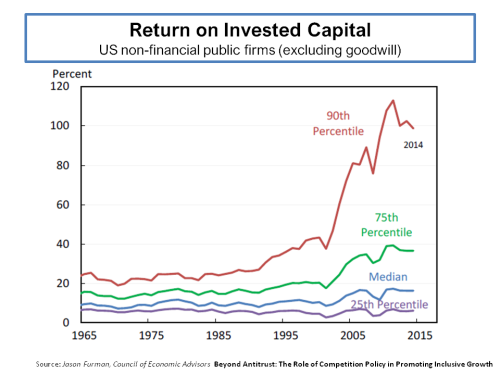 These top firms, primarily in the technology sector, have increased their return on invested capital (ROIC) from 3 times the median in the 1990s to 8 times today, dramatically demonstrating their ability to generate economic rent in the digitized world we now live in.

“Traditionally, price fixing and collusion could be detected in the communications between businesses. The task of detecting undesirable price behaviour becomes more difficult with the use of increasingly complex algorithms for setting prices. This type of algorithmic price setting can lead to undesirable price behaviour, sometimes even unintentionally. The use of advanced machine learning algorithms to set prices and adapt product functionality would further increase opacity. Competition policy in the digital age brings with it new challenges for policymakers.”

IT firms have the highest operating margins of any sector in the S&P500, as can be seen below. 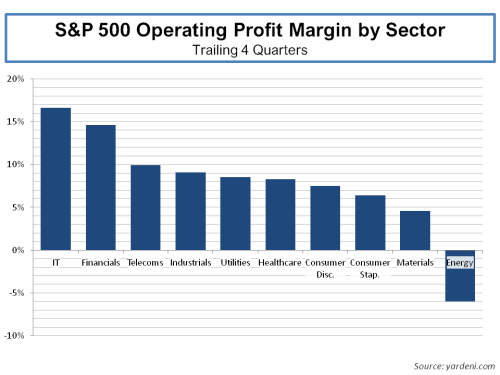 And the increasing size of these technology firms have contributed materially to the increase in the overall operating margin of the S&P500, as can also be seen below. These expanding margins are a big factor in the rise of the equity market since 2009.