Munich kicked off the year end reporting season for insurers this week with a pre-announcement of results that beat their guidance. For non-life reinsurance, low large and catastrophe losses plus 5% of prior year releases mean that the 92% combined ratio is only 1% higher than 2012 for Munich Re despite the weak pricing market.

I am expecting to see strong non-life results across the market as it looks like attritional loss ratios for 2013 are lower than average which, with low catastrophe losses, should make for low combined ratios in 2013.

For specialty nonlife insurers and reinsurers, I would expect combined ratios to come in the mid to high eighties on average with ROEs in the low to mid teens. The relatively low investment returns are hurting ROEs which in the past would of given high teens or low twenties for such underwriting ratios.

The business models of the European composite reinsurers are not as sensitive to combined ratio with the life side providing more stable earnings. I would expect most of the large composite reinsurers to come in in the low 90s or high 80s (Munich’s figure was 92%) whilst giving ROEs similar to their non-life specialty brothers in the low to mid teens.

The graph below illustrates that todays combined ratios don’t mean the high ROEs they once did (2013 figures are as at Q3). 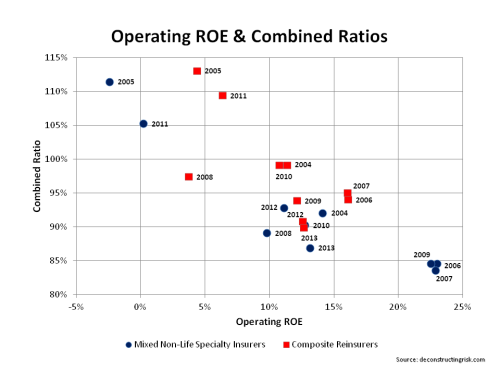